“We’ve worked with this customer for several years,” said Sam Henry, President of Horizon Power. “Nearly all their sites are remote, so the microturbines’ low maintenance and reliable power have been key factors in their decisions to purchase Capstone microturbines.”

Natural gas from a nearby pipeline will fuel the dual mode C600S microturbine that will provide primary power to the compression station. Although Capstone has smaller units running across Wyoming, the larger C600S microturbine will be the first in the state.

Horizon Power serves producers in the Eagle Ford, Permian, Barnett, Mancos, San Juan, and Wattenberg Shale plays. Capstone expects the order to ship the next few weeks. It likely will be commissioned later this fall.

According to the U.S. Energy Information Administration, Wyoming supplies more energy to other states and has more federal oil and natural gas leases than any other state. Wyoming produced 6.2 percent of the nation’s marketed natural gas in 2015, and continues to rank as one of the top 10 natural gas producing states in the United States.

“We are seeing a steady increase in our global oil and gas business,” said Jim Crouse, Capstone’s Executive Vice President of Sales and Marketing. “Repeat oil and gas customers like this help solidify Capstone’s position as the microturbine market leader and the preferred go-to power solution in the recovering oil and gas market. The new three-bay enclosure is a new benefit as customers across all our market verticals enjoy smaller and lighter packages that are less costly to ship and easier to install.”

The new three-bay C600S enclosure is lighter and offers a smaller footprint than the original. All C600S and C800S microturbines will feature a smaller, more efficiently designed enclosure beginning April 1, 2017. 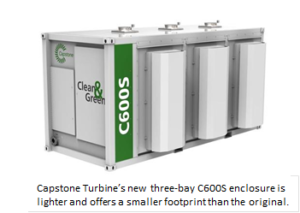