December  2016 – One of the nation’s Top 20 oil and gas producers added 16 Capstone microturbines to its 144-unit fleet that powers company well sites throughout the San Juan Basin. The latest microturbines from Capstone distributor Horizon Power Systems will provide an additional 2.6 megawatts of power.

Utility service is not available at the company’s well sites since many are located miles from the closest towns in extremely remote and rugged areas. Capstone microturbines, which average 99 percent power availability and run on raw natural gas produced from the field, are the sole power source for all of the producer’s operations in the San Juan Basin.

For 16 years, the Top 20 producer has worked closely with Horizon Power — Capstone’s largest distributor in the Americas – to build a growing microgrid system that produces uninterrupted power for onsite equipment across several sites. The microgrid connects isolated well sites across the Mancos and Gallup shale plays in the San Juan Basin. In addition to the Mancos and Gallup plays, Horizon Power sells and services Capstone microturbines in the Eagle Ford, Permian, Barnett, and Wattenberg shale plays.

The producer’s latest order with Horizon Power is for a C800 (800 kilowatts), two C600s (600 kilowatts each) and multiple C65 and C30 microturbines (65 and 30 kilowatts respectively). Low-emission power generated by each microturbine will drive artificial lifts and assist with the transfer of oil and water to various points of the production field.

A microturbine, which is based on jet-engine technology, is much easier and less expensive to maintain than traditional onsite engines because it has only one moving part (compared to hundreds of moving parts in conventional gensets). Instead of needing oil, other lubricants, or coolants, a microturbine use simple air bearing technology that significantly reduces downtime, thus increasing production opportunities and reducing maintenance costs.

“Some microturbines in the microgrid system have over 100,000 operating hours,” said Bryan Hensley, Horizon Power’s Executive Vice President of North American Sales. “The producer knows how reliable a microturbine is. Ever since the first microturbines were installed in 2000, they have repeatedly worked with us because they are committed to using Capstone microturbines.”

Horizon Power expects to commission the microturbines in three phases starting in December.

“Despite the prolonged slump in the energy industry, oil and gas producers continue to look for ways to reduce their operational costs and meet the increasingly stringent flaring requirements, which is a long term catalyst for our business,” said Darren Jamison, President and Chief Executive Officer at Capstone.

Capstone microturbines meet or exceed the world’s toughest emission standards. Since the first installation for the producer in 2000, none of the sites have required additional emission-reduction equipment because microturbines already meet EPA standards. Nitrogen oxide emissions from a Capstone microturbine is less than 9 parts per million. According to the Environmental Protection Agency, “diesel engines produce 5 to 20 times the NOx (on a ppmv basis) of a lean burn natural gas engine” when used in a combined heat and power application.

“We are beginning to see positive movement in our oil and gas business as customers continue to see the value in the scalability of Capstone microturbine technology,” said Jim Crouse, Capstone’s Executive Vice President of Sales and Marketing.

We are here to answer any question you may have about our Agency. We will respond as soon as we can. 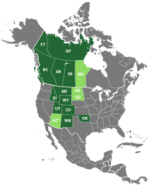